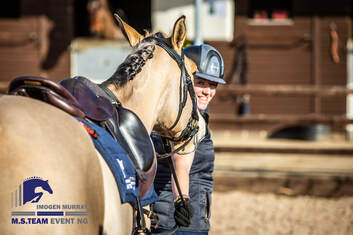 ​A former working and show hunter pony rider Imogen had the taste of the bright lights in the equestrian world at a young age, regularly competing at The Royal International Horse Show and The Horse Of The Year Show, but the eventing bug bit aged 13 and it has been a successful eventing career ever since.

As the main jockey for the yard, Imogen has been riding since age 4 and has had many successes along the way.

2011, saw Imogen short listed for the Junior European Event team, however she sadly broke her ankle prior to the final trial.  Further short listings followed in 2013 and 2014, this time for the Young Rider European Event Team.

The highlight of Imogen's career to date came in 2014, with her first CCI**** completion at The Land Rover Burghley Horse Trials, where Imogen finished as the highest placed first timer.

Imogen has successfully completed 7 CCI*****s, consistently being one of the youngest riders in the field.  2014 saw Imogen and Wiseguy completed their first CCI***** at The Land Rover Burghley Horse Trials, providing the highlight of her eventing career up to that point.  Since then Imogen has gone to complete 6 further 5* rounds at both Burghley and The Mitsubishi Motors Badminton Horse Trials, recording multiple top 20 finishes and taking home trophies for highest placed under 25 rider and highest climber after the dressage.

As recognition for her impressive Burghley appearances Imogen was award the Barbara Cooper Trophy for the best performance by a young British rider at Burghley.  A true honour to be the first recipient of the trophy, awarded at the British Equestrian Writers Association luncheon at The London International Horse Show, Olympia.

2019 saw Imogen rise to her highest FEI World Ranking position of #32.  In the same year Imogen and Ivar Gooden finished 8th and 6th at the Badminton and Burghley CCI5* events and was also long listed for the European Championships.  Going into an Olympic year they rank #7 in the world as an Olympic qualified combination.

Kim 'Mummy' Murray - 'The backbone of the yard' 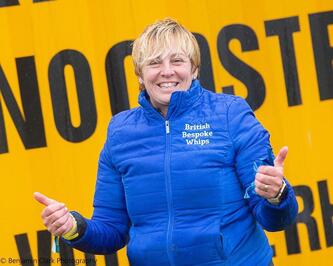 There isn't really a job that Kim doesn't do, whether it is grooming or driving the lorry, or offering help, support and advice, Kim is very much the backbone of M.S. Team Eventing.  Rarely riding herself any more, Kim is often found around the arena's edge offering helpful (and occasionally not so helpful) advice on perfecting the final performance.

Kim also does ALL of the plaiting and polishing - because "no one else does it properly!" 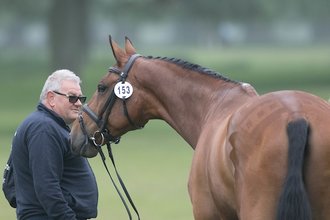 Dean has the very crucial role of providing the funding for M.S. Team Eventing!

Dean tries to attend as many competitions as possible, even if he does spend a lot of time getting shouted at for getting in the way!  He believes himself to be a bit of a 'trainer extraordinaire', although he is often quite helpful at spotting what can be improved in competition.

Dean also likes to pace and was even told to stand still at Burghley when he paced during the whole of Imogen's dressage test.  Very rarely does he actually watch the 5* cross-country round.  Dean is usually found pacing outside the TV tent, glued to the radio commentary! 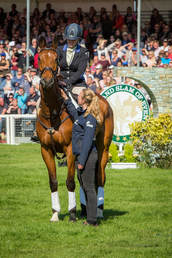 Scarlett came to M.S. Team 3 seasons ago, as a Level 2 Apprentice from Moulton College. After a baptism of fire in her first week she decided to stay and in her 1st year she won Apprentice of the Year from Haddon Training.

Scarlett may have moved on to follow a career away from eventing but she remains part of the team and regularly returns to help around the yard and exercise horses when Imogen is away competing.

M.S. Team Eventing's farrier Paul, has shod our horses for numerous years and we are very lucky that he will come to us as quickly as possible should one of the horses lose a shoe. He has been known to come almost every Monday during the season, and has even visited on a Sunday when the horse was due to be at training on the Monday!

The lady with the magic hands. Halina has been 'horse physio' for many years. She is simply amazing and her depth of knowledge and ability is invaluable. She is on hand to help and imparts her knowledge willingly. She visits the yard at 6 weekly intervals and often inbetween.

Tim plays many roles around the yard, fixing things (breaking them as well!), maintaining the ground, as well as playing the very important role of future husband.